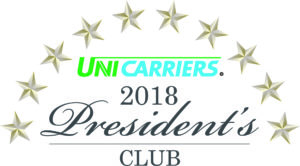 UniCarriers Americas Corporation (UCA) today announced its 2018 President’s Club Award winners that represent the top 10 performing UCA dealers throughout the Americas. Setting the standard throughout UCA’s dealer network, the group of dealerships has played a substantial role in the company’s continued growth and success.

Each UCA dealer was evaluated on the following criteria: Equipment sales, market penetration, aftermarket parts sales, service expertise, overall performance and professionalism. To honor the President’s Club winners, UCA invited representatives from each company to celebrate their achievements at the exclusive Fairmont Banff Springs in Banff, Alberta, Canada, on August 19–23. The President’s Award, the highest honor within the President’s Club, will be announced during the awards banquet.

“Our success relies heavily on the dedication made by our dealer network because they help build our brand and our company,” said James J. Radous III, president and CEO of UCA “Being selected as one of 10 President’s Club Award winners not only exemplifies the hard work and professionalism each of these companies bring every day, but it also demonstrates a group who have proven their commitment to UniCarriers and our mission of redefining reliability.”

The following 10 dealerships were selected as this year’s President’s Club Award winners:

Forklifts of Minnesota, located in Bloomington, Minnesota, has been awarded the honor five times.

Forklift Systems, located in Nashville, Tennessee, has received the award 24 times and this year marks the company’s ninth consecutive award.

Headquartered in Coraopolis, Pennsylvania, H&K equipment has been awarded the honor the last three consecutive years.

Headquartered in Omaha, Nebraska, this organization has won the award the past five years and six awards in total. The company won its first President’s Award last year.

Montacargas y Baterias is located in the City of Chihuahua, Chihuahua, Mexico. This is the company’s first President’s Club Award.

Select Equipment is headquartered in Buena Park, California. The dealer has been awarded the honor three times and received the President’s Award once.

Sunbelt Material Handling is located in Dallas, Texas, and has earned the award for four consecutive years.

Located in Leon, Guanajuato, Mexico, Vegusa Maquinaria has been awarded the honor the past four years and eight years in total. The company was the recipient of the President’s Award two consecutive years in 2015 and 2016.