Green Cubes Technology has announced its completion of a sizeable deal with a major agricultural retailer.

Green Cubes Technology has announced its completion of a sizeable deal with a major agricultural retailer.  With its Lithium SAFEFlex® battery system, Green Cubes is powering material handling equipment at a new center that is over 850,000 square feet.  The company has ordered over 130 class II and III batteries since last year.  To put into perspective, each piece of equipment only requires one lithium-ion battery while it usually requires two, if not, three lead-acid batteries.  Along with needing a large portion of square footage for a battery storage room with lead-acid, there could have been 260-390 lead-acid batteries needed if that route would have been taken.  The large quantity of batteries, storage room, and maintenance are all eliminated by the decision to pick Lithium SAFEFlex.

While at the Promat trade show this year, a representative from the company stopped by GCT’s booth and shared greater than expect results from the implementation.  It was stated that due to energy efficiencies of the new lithium systems; they had achieved more electrical savings than originally planned!  The new facility had implemented several new efficiency systems, like the lithium motive batteries, which overall had saved so much electricity they were not using enough power to justify the grid installed. The usage would not pay for the grid and created a “problem”. Of course, this “problem” would be quickly resolved by having other companies locate to the new industrial zone and allow utilization of the new power grid. Having this “problem” was beneficial, and something which they hope to duplicate in the future.

Lithium SAFEFlex® battery systems provide numerous advantages over the traditional lead acid.  Some of the major benefits of these systems include: needing one battery per piece of equipment, maintenance free – no watering and no equalizing needed, saving space with no need for a charging room, providing higher equipment performance, no need to swap batteries, and reducing the environmental impact. 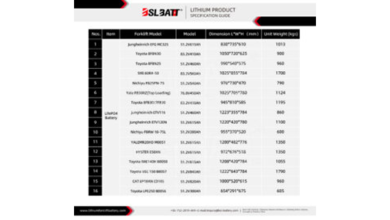 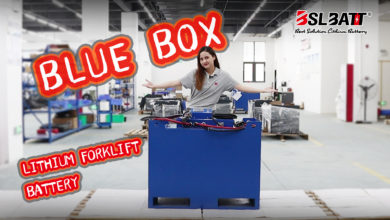 What’s in the blue box? Modules, Design and Chemistry of Lithium Batteries for Forklifts

Do You Want To Be A Distributor Of BSL Lithium Batteries?